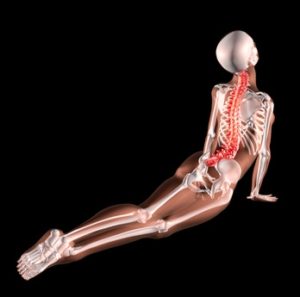 Getting injured in yoga does occur from time to time, especially with yoga being sometimes taught in large, gym-like classes with little or no feedback from the teacher and an often competitive atmosphere.  While Hatha yoga is a form of physical activity, which by nature can involve risks, the reduction of yoga to just Asana (postures) promotes a certain competitiveness, and the need to be ‘better/more flexible/stronger’ increases the risk of injury.  In this context, it’s helpful to review the origins of yoga and why it is so critical to teach students the 8 limbs of yoga:  Traditionally, yoga was taught one-on-one with an Acharya (teacher).  The teacher determined when the student was ready to move on from simple to more complex postures – even if that meant, doing only sun salutations for a month.  The teacher also ensured that the student was aware of the complete yoga practice:
Most of you will know that yoga is more than Asana and if we follow Patanjali’s Ashtanga (8-limbs) lineage, the first and second limbs are composed of the Yamas and Niyamas (moral and ethical guidelines), which are listed in order of priority.  It is telling, that the first two Yamas are Ahimsa (non-harming to ourselves or others) and Satya (truthfulness: be driven by the truth, not the ego).  Thus, if we are dedicated to the yogic path, we need to observe and understand the first two limbs (and particularly the first two observances of the Yamas) before we move on to the third one (Asana).
While in the modern world, it is often not practical to teach only to an individual, our aim at Yogita Yoga is to offer as much personal assistance in group classes, in addition to offering Private Classes where one-on-one teaching is practiced.
Next time you come to practice, take some time to inquire about the Yamas and Niyamas (they are summarized on the picture to the right of the entry door) – it will not only make you a better yogi but may also help you stay clear of injuries.

“Let your heart guide you. It whispers, so listen closely.” -The Land Before Time