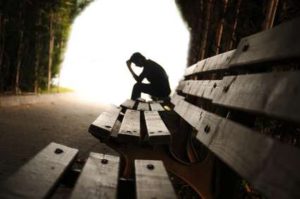 We are often told to “get in touch with our emotions”.  Whether it is because others want to justify their emotional state or we should release some old childhood scars or unleash so-called ‘buried’ emotions.  Getting in touch with our emotions is often seen as a good, if not therapeutic or cathartic process.  Allow me to present an alternative opinion here that was inspired by an excerpt from one of my favourite teacher’s books: Gregor Maehle’s “Ashtanga Yoga – Practice and Philosophy”:
According to yoga, emotions are nothing more than imprints from the past.  The yogic term for such an imprint is  samskara .  As such, emotions are just another form of the fluctuations of the m ind, leading us to react to a present situation according to past conditioning.  This past conditioning left an imprint (samskara) in the mind together with a conserved feeling that we tap into as soon as we are confronted with a similar condition.   Because many of us don’t understand this cycle and the dynamics of it, we remain trapped by the samskaras.
Does it mean it is ‘bad’ to be emotional? Not at all.  In fact, regular yoga practice may bring out some deep-seated emotions and you may struggle in the beginning how to identify or deal with them.  If we treat emotions as just another fluctuation of the mind we can slowly disengage from them, rather than being controlled by them.
Yoga is designed to bring us closer to the truth – and for most of us that means a truth that we’d sometimes rather not know about. When you stick to your yoga practice (i.e. committing to a regular practice and not being discouraged at the first sign of surfacing emotions or soreness in the body), you will find that this method works like the scalpel of a surgeon: it cuts through the superficial layers and exposes the core.  This core may manifest itself in physical blockages but the reason why we are stiff or inflexible in some areas, always has a deeper (sometimes emotional) reason.  That’s why yoga practice is a holistic practice that does not start or stop with the asana (postures) but which takes us on a lifelong journey of exploration and discovery.

She (Evelyn) has a scientific understanding of health and injury, which makes someone like me, who is carrying old injuries and health problems, feel safe and which inspires confidence. Maggie T.