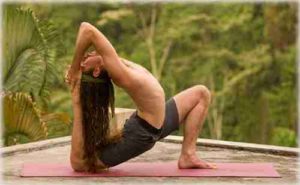 The method of Sukhashanti yoga was developed by Noah Mckenna, and the practice at Yogita Yoga is based on Noah’s sequence.  Sukhashanti is the term he uses to describe his approach to Hatha Yoga.  In Sanskrit sukha means comfortable, easy and happy and shanti means peace.  He chose this combination to emphasise that peacefulness is a natural and comfortable state which may be cultivated by the practice of the yoga.  Anyone who has practised yoga knows that often the positions can be challenging and intense, but the after effect is a release of tension from the body which allows a feeling of ease.  This describes the essential process of yoga, creating tension in order to release it.  The word Hatha is widely translated as meaning sun-moon describing a unity of opposites, sun representing the active energy and moon as receptive form.  Hatha Yoga is a process of cultivating a special state of being by unlocking the mind-body puzzle.

The evolution of this approach to Sukhashanti yoga began for Noah over a decade ago when he asked himself the question “How would my practice be if I had no methods and teachers?”.  I imagined a musician who having learned to play many tunes one day begins to compose his own works, then as an accomplished artist is able to improvise music to suit a situation.  From my talks with learned Indian Yogis I had heard that after many years the practice becomes an expression of what the Yogi intuits is necessary at the time.  Sukhashanti is the child of my experience having to care for my body and finding the safest and easiest ways to explore the depths and then sharing these methods with others.

This is an edited excerpt from Noah’s website. Click here for the full description of Noah’s Sukhashanti practice.

I enjoy your (Evelyn’s) words of wisdom before the class and also the stories you share with the class after practice. It is a lovely reminder for me about what is important in life, thank you. Mirella

“There are treasures beyond compare in the ocean. If you seek safety, stay ashore.” -Sufi saying.