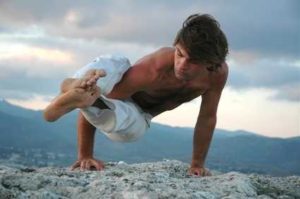 According to an RMIT study of 4000 Australian yoga practitioners, around 90% of those who practice yoga are women.  This is particularly interesting since yoga was originally practiced in India exclusively by men.  Also, when you look at ‘famous’ yoga teachers, the majority of those are (still) men.  So what is it that holds many men back from attending yoga classes (because they obviously can advance to the highest level once they are hooked)?
One of the common misconceptions is that yoga is only for flexible people (women) and that you “don’t get a good enough of a work-out” in a yoga class.  However, one of Australia’s leading yoga teachers, Simon Borg-Olivier, says once you exchange ‘flexibility’ with ‘mobility’ and point out that many yoga postures were developed for building strength, men view yoga as an ideal way to cross-train, de-stress and to gain greater agility.
Another aspect that is a deterrent to many men is the need to compete and the fear of ultimately discovering one’s own shortcomings – especially when in a room full of women!  This is why many yoga studios offer classes solely for men.  However, by sticking to their ‘peer group’, those classes loose an important aspect of the yoga practice: being outside your comfort zone and being confronted and having to accept your own limitations.  Santosha (contentment) is one of the principles of the Niyamas and as such, we should accept what presents itself to us without expectation, jealousy or frustration.  Having said that, this is easier said than done – as all the women in the class can happily attest to!
If we (men and women) realise that we indeed share similar fears, hopes and dreams, we are one step further up the yoga ladder 🙂

Learning yoga at Yogita is an amazing and enjoyable experience. Alyson

I feel so happy and blessed that I have found you and Yogita Yoga. It’s perfect! Griselda