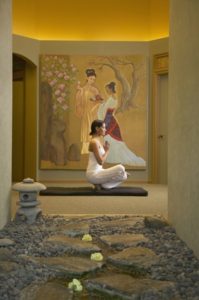 Some of you may recall me saying that the body tends to follow the path of least resistance.

Let’s explore this concept not only form a physical but also from a mental aspect:

The path of least resistance is essentially the ‘same old, same old’:  Emphasising what works well and what you are good at and ignoring or dismissing where there is stiffness or aversion or where you have encountered hurt or failure in the past.

But, if you decide to not let the past define you (the ‘fixed mindset’), your future can change dramatically.  Similarly, if you divert from the path of least resistance (activating the ‘growth mindset’, by e.g. becoming a student again, learning something new or challenging ingrained patterns) it can give you a new perspective on life and the old paradigm of “I’m too …. (fill in the blank) … to do that.” becomes a busted myth.

So, what happens in our yoga asana practice with regard to the mindset and our path of choice?  You all know the posture that you wish wouldn’t come up in class and just the name can make you nervous or feel defeated:  “Anything but this!” could be a response and the urge to sneak off to the bathroom to sit this one out, is all too common.

For me, this used to be the case both in backbends and headstands (and later on handstands):  I was set in the notion that backbends were simply impossible for me and that I would never be able to do headstands without a wall or go up into a free-standing handstand without my shoulders collapsing underneath me.

And so I continued to struggle on the path of resistance, trying really hard and getting close to tears at the end of the practice when it was just all too hard and nothing seemed to change.

After coming back from a long injury which forced me to stop moving in any shape or form for about 3 months, I was so happy to get back on to my mat that I didn’t care one bit what I looked like, what I could and could not do and just enjoyed being able to practice again.  And this is when it happened:  I stopped trying so hard, I stopped my attachment to the outcome and I limited my attention to 3 things (Ujjayi breath, drishti and bandhas) …  and I was practicing what really is yoga!

Instead of running away from postures that I used to resent, I just tried, breathed and took one step at a time and found that each time, there was a millimetre more movement or more strength or more joy (and no fear or resentment).  And when the mind goes and the breath takes over, you can access these possibilities that seemed so impossible for such a long time.

If we understand that ‘flexibility’ and ‘strength’ are not all about stretching and power but are part of an attitude that we can learn, we can relax and let go: we have to lose the ‘fixed mindset’ that assumes a pre-determined outcome and open up to the ‘growth mindset’ that sees a challenge (aka diverting from the path of least resistance) as a welcome opportunity to evolve, learn and grow, rather than a threat to our ego or status.

The lessons of yoga are sometimes not what we want to see, feel or hear:  The notion that we cannot force a posture because it looks ‘cool’ may initially hurt our ego, or (to transfer it to real life) to stubbornly hold on to a path that we have outgrown gives us the illusion that “yes, darn it, I am happy!” when really, we are not.

Most importantly, yoga happens slowly and over time – and here is another thing:  It doesn’t get any easier!  Do you think we have it all figured out because we are Yoga teachers?  We struggle with the 8 limbs every day but all we can do is try to be the best person that we can.  That doesn’t mean we don’t make mistakes, but we don’t let our mistakes define us and use it as an opportunity to rise above it.  And while it doesn’t get any easier (as the proverbial rabbit hole takes you deeper), it does give you something that nobody can take away from you: A sense of meaning, of self-worth and of gratitude.

Yogita Yoga has a really warm and welcoming space with lots of clean props/rugs etc. I really enjoy the Essentials of Yoga class. It is both challenging and calming and always makes me feel more grounded. There’s plenty of different classes and times to choose from and thankfully the booking system is really user friendly. Highly recommend! – Judith

I’ve been attending yogita yoga classes for years and definitely recommend this studio. It’s beginner friendly, well priced, and welcoming for people of all ages. I love that there is a strong focus on mindfulness in many of the classes as well. – Esther

“There are treasures beyond compare in the ocean. If you seek safety, stay ashore.” -Sufi saying.