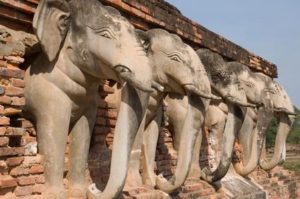 Yoga is a philosophy not a religion, its historical origins are deeply rooted in the ancient Indian cultural traditions associated with Hinduism, Jainism and Buddhism.  As such, while yoga does have rituals and spiritual texts associated with its heritage, it does not have exclusive doctrines that preclude any religion.  The aim of yoga is to bring an awareness of your own innermost nature and this is sought through the combined practice of meditation, asana (postures), pranayama (breathing exercises) and the observance of moral and ethical guidelines.  The two most important spiritual texts associated with yoga – the Patanjali’s Yoga Sutras and Bhagavad Gita – are considered more like ‘guides to action’ and inspirational reading rather than religious scriptures.  Gandhi referred to the Bhagavad Gita as a “spiritual reference book”, which aided his quest in realising Indian independence through selfless action and non-violence.  The philosophy of yoga puts the responsibility for attaining spiritual bliss (‘samadhi’) on the individual and it is the action in our everyday life that determines our ultimate destiny (‘karma’).

She (Evelyn) has a scientific understanding of health and injury, which makes someone like me, who is carrying old injuries and health problems, feel safe and which inspires confidence. Maggie T.

I enjoy your (Evelyn’s) words of wisdom before the class and also the stories you share with the class after practice. It is a lovely reminder for me about what is important in life, thank you. Mirella

“Retire to the center of your being, which is calmness.” Paramahansa Yogananda